Campbell Johnston is Chairman of the Advisory Committee and a Founder of JRT Partnership.  He has a distinguished career as a legal practitioner having been a partner in a national corporate law firm for over 30 years, including a period as Chairman of Partners.  He has practised in all areas of banking and finance law, with extensive experience in project and corporate financing and domestic and international capital markets transactions.  He has represented both sponsors and financiers in a wide variety of industrial resources and infrastructure development projects, sales and acquisitions.

Campbell is also an accomplished rower.  He won gold for Australia along with fellow Founding Director of The JRT Partnership, Geoff Rees, in the 1974 World Rowing Championships. 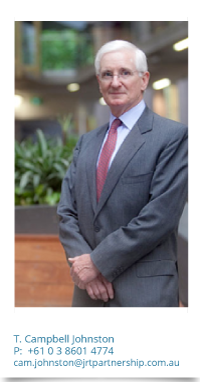